A number of years ago I took a graphic arts course in which we needed to create a logo for ourselves.  In fact, we had to hand-draw it, so obviously this happened in the time before internet ready-made downloads offered printed logos that could be selected and then “Photoshopped” to perfection.  I chose a feather, one with haphazard edges that represented to me at least, rugged days of wear and tear. I drew folded-over edges and creases that left my feather looking bent and crooked but as I surmised, a feather with personality!

A feather that had withstood its adaptation to the unknown environment of a forest floor.  A feather that had survived crushing forces of hiking boots, shuffling kicks from hooved animals, and flattening shoves of thrown backpacks.  I imagined my feather being discarded from its winged home, falling to the ground much like I would lose a strand of hair by brushing against a rough piece of bark while moving through the trees.  I pictured the swooping eagle descending closer and closer to catch its prey from the forest floor and then as it beat its wings to slow its descent a feather, a single feather dislodged from underneath its wing, finding its way to the path below.

Feather of mine, found as I tracked the trail through the woods, following the winding way to a place to be alone and ponder my thoughts.

I’m not sure if I drew my feather logo with detailed depictions of tattered strands because I had in mind its history or whether I drew it with its future unfolding before me.  To me, that feather represented a way to relate the words that I would share with others.  That feather would inspire me, as I felt not only its fine fragile hairs but its firm central shaft as well.  Created to be attached to the whole, to be part of a magnificent, powerful eagle wing.  How could it not lead my imagination to be a storyteller? 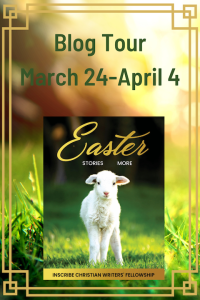 I am participating in a Blog Tour along with other contributors to the book Easter: Stories and More. For more details, click here…